JVATiTD - About The Journal - History

The Journal of Venoms Animals and Toxins including Tropical Diseases (JVATiTD) was launched in 1995 by the Center for the Study of Venoms and Venomous Animals (CEVAP) – a research unit of the São Paulo State University (UNESP) – with the initial title of The Journal of Venomous Animals and Toxins (JVAT – ISSN 0104-7930). At that time, the main focus of the publication was toxinology only. Therefore, it published scientific papers on venomous animals, plants and microorganisms to understand their mode of action; as well as studies on the biochemical composition of toxins and venoms to understand their interaction with life forms (especially humans) and pharmacological potential.

In the 1990s, commercial internet was not yet available in Brazil and there were fewer than one hundred digital journals in the world. Furthermore, researchers were used to read only printed scientific articles. Therefore, it was daring to launch a scientific journal in Brazil with its contents available on 3.5-inch diskettes readable on computer screens. The authors could also print the files from the diskettes. JVAT was initially published every six months and its editorial board was composed of Brazilians and foreigners.

Subscribers would be mailed a journal cover with a diskette enclosed (Figures 1 and 2). It was the end of the 20th century and the great question concerning publishing was: would the digital format replace the printed one? 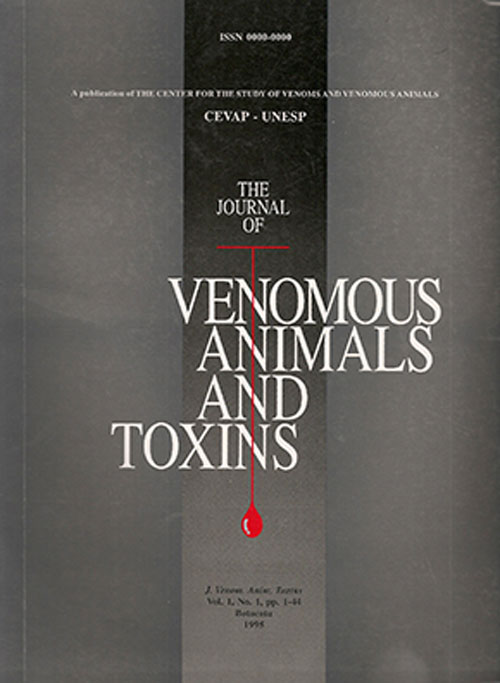 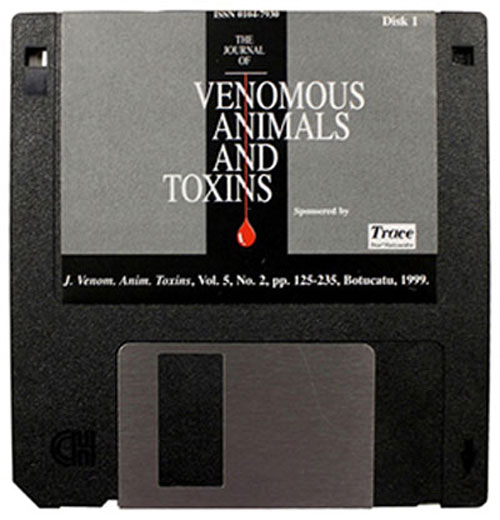 Figure 2. The last diskette distributed by mail in 1999.

The main challenges of that time were:  What software should be used for editing? What platform should be chosen for running content? How can the size and quality of digital images that consumed much space on the diskette be optimized? What is the maximum number of diskettes sufficient to contain all the content of the articles published? Where and in what format should we deposit the contents to preserve memory? These questions were not immediately answerable. To the contrary, only time and development would respond gradually to these challenges.

The content of the diskette could be installed on the user’s computer only if it had a Windows platform. Therefore, the system provided a navigation screen that contained customized buttons in accord with the content (Figure 3). Then, the journal accepted letters to the editor, review articles, original articles, short communications, case reports, abstracts of theses and dissertations, abstracts of congresses and symposia. Furthermore, the system provided search alternatives by means of a key word and printable content.

In 1998, the Scientific Electronic Library Online (SciELO) officially began its activities in Brazil and selected JVAT to be included in its collection. The journal came to have a page inside the platform, which bore its logo and access statistics (Figure 4). 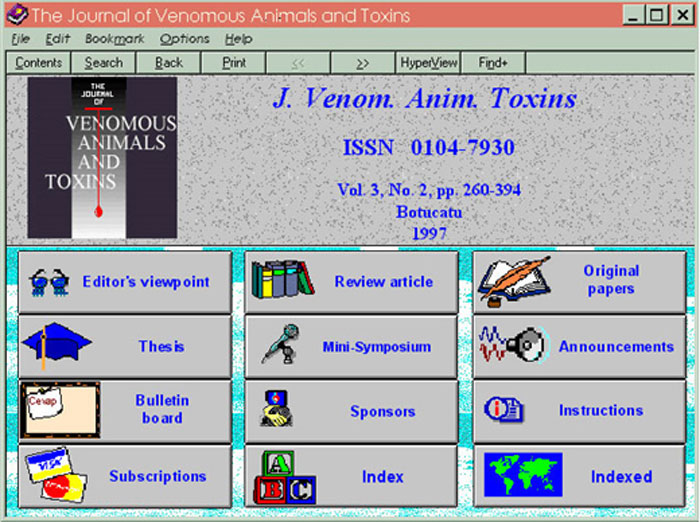 Figure 3. Screen for navigating content installed on the user’s computer.

The diskette format was maintained until 1999, when the CD-ROM entered the market with its greater storage capacity. Consequently, it was necessary to migrate to this new medium (Figure 5). From then on, high-quality images were storable, whereas video and audio clips could be inserted into scientific articles. This was revolutionary for the era. Although the new support permitted qualitative improvement of the images distributed, the mailing costs persisted since the CDs were sent in bubble-wrapped envelopes (Figure 6). 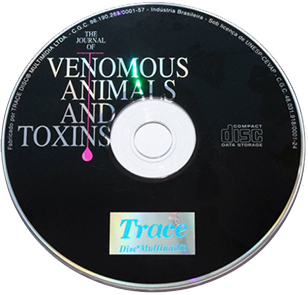 Figure 5. Distribution of the journal in a new medium: the CD-ROM. 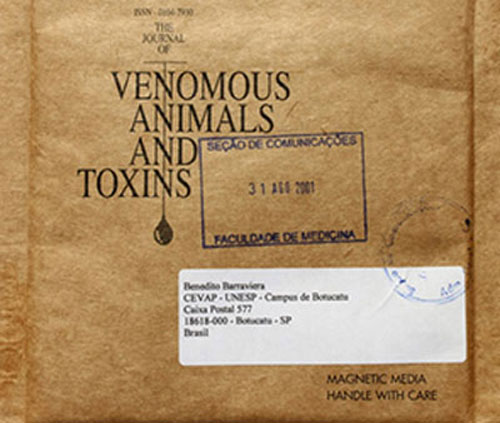 Figure 6. A CD-ROM was inserted into a bubble-wrapped envelope and sent through the mail.

Online phase: from 2003 until the present

Starting in 2003, tropical diseases were included in the scope of the publication in order to broaden it (Figure 7). Thereafter, the title became the Journal of Venomous Animals and Toxins including Tropical Diseases (with a new ISSN 1678-9199). That same year, the first site for the distribution of contents and electronic submission of manuscripts was created (Figure 8). Subsequently, the sending of content by mail was abolished definitively. Thus, there was a new paradigm shift:  the electronic submission of the manuscripts began and readers were expected to read the articles on the computer screen. In 2004, at the request of the SciELO library, the journal was put out every four months and reached quarterly production in 2005. This pioneering site has been modified at several moments over the years, always aiming to make it more user-friendly and easily navigable (Figures 9 and 10). 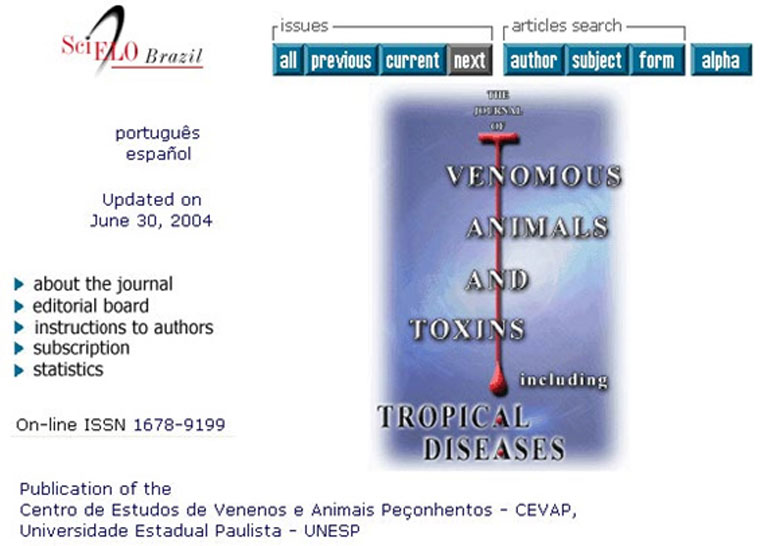 Figure 7. New page on the SciELO platform, with the expanded journal title, between 2003 and 2012. 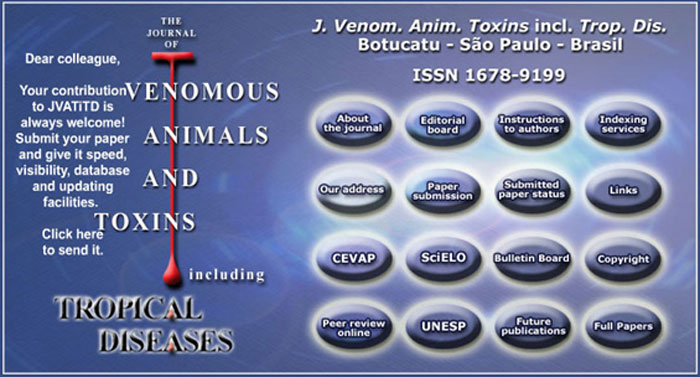 Figure 8. The homepage of the journal constructed in 2003. 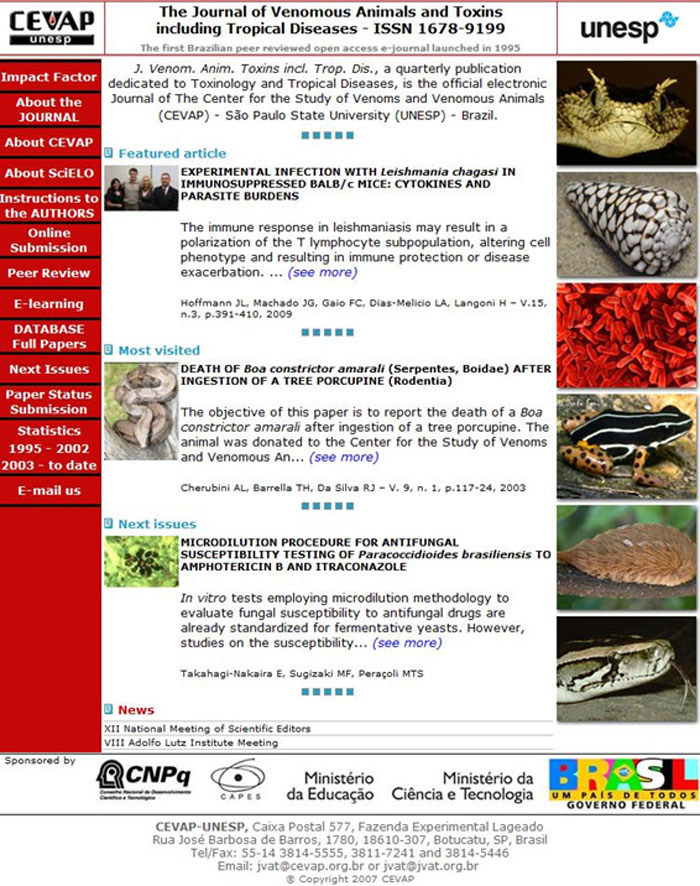 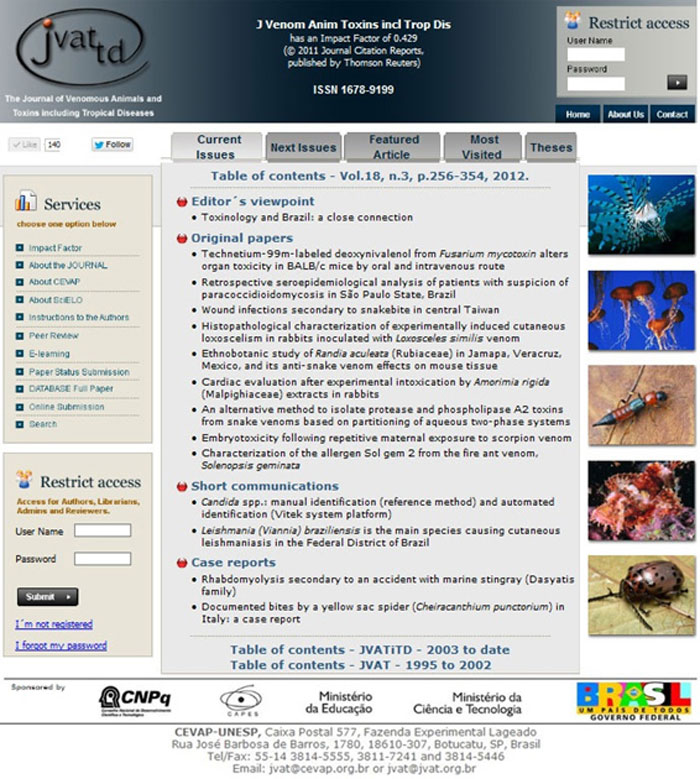 Continuous flow: from 2013 until the present

The impact factor (I.F.) attributed by the Journal Citation Reports (JCR) was published for the first time in 2007 as 0.43. This value varied from 0.30 to 0.54 between 2007 and 2012. At that moment, the editors decided to seek an international partnership that could aid in acquiring new indexing databases, besides collaborating in increasing the I.F. Thus, BioMed Central, an open-access commercial publisher owned by Springer Nature group, was chosen in 2013. This was when the journal started to be published in a continuous flow (Figure 11). Another important achievement in 2013 was being indexed in PubMed and PubMed Central (Figure 12). This certainly provided greater visibility, credibility and citations to the publication. The I.F. grew from 0.42 in 2013 to 1.44 in 2017 (Figure 13). In the database Scimago-Scopus, in 2017, the index Citations per Document (Cites/Doc) reached a plateau of 1.505 (Figure 14). 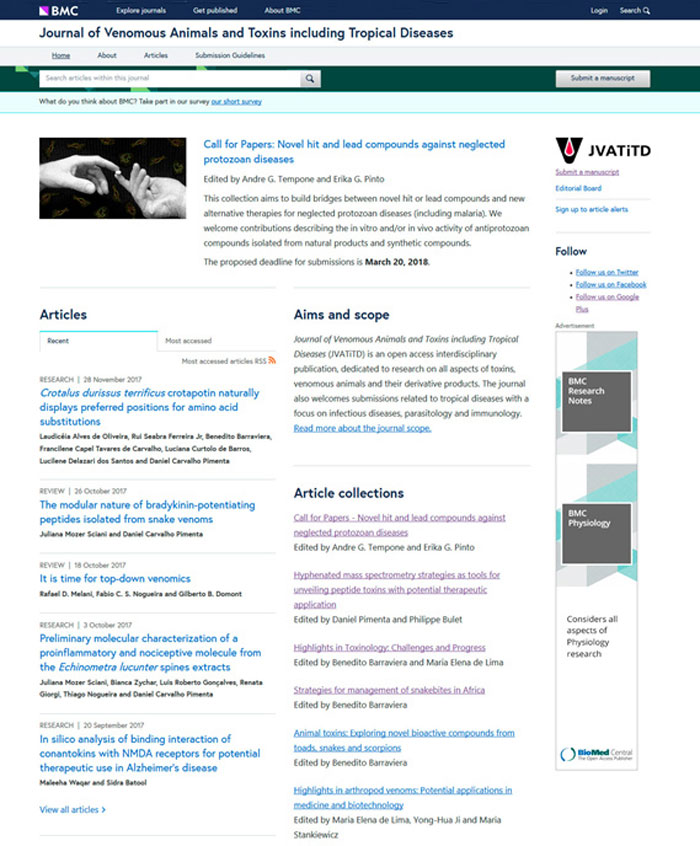 Figure 11. Homepage of JVATiTD in 2017, when the articles were published in continuous flow.

Figure 12. The journal has been indexed in PubMed Central since 2013. 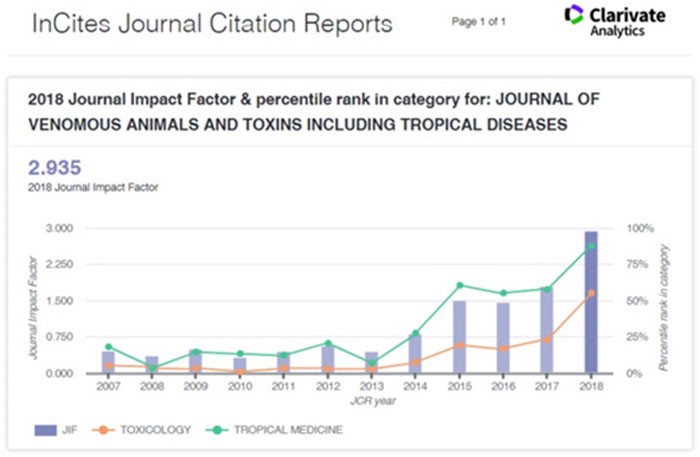 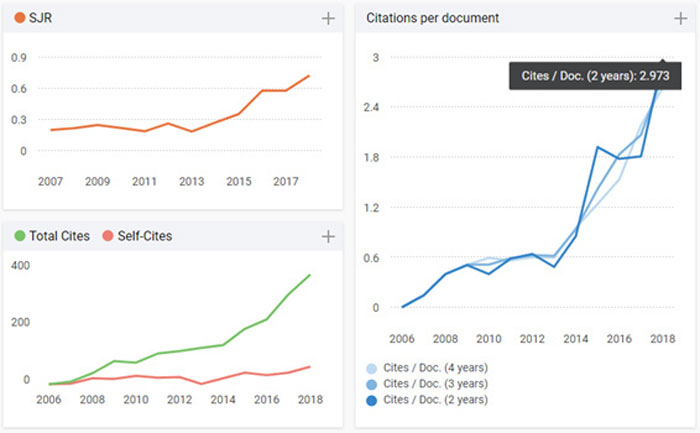 The creation of a noncommercial academic journal in digital form 25 years ago, when commercial internet was not available in Brazil, was a challenge. This paradigm shift was possible only due to its step-by-step development: first the diskette with the possibility of printing the issue, then distribution via CD-Rom that supported more images as well as audios and videos, and finally availability of articles on the internet and online submission. The milestone of electronic publishing was reached in 2013, when the continuous flow process started. In 2019, JVATiTD returned to being published exclusively in Brazil in partnership with SciELO (Figure 15). Thus, 2020 marks the 25th anniversary of JVATiTD with the following relevant metrics for the journal: a 2-year Impact Factor (Web of Science) of 2.935, 3-year CiteScore (Scimago-Scopus) of 2.63, and 2-year Cites/Doc (Scimago-Scopus) of 2.973. This successful case clearly reflects the notion that, in many instances, a radical paradigm shift must be implemented gradually. 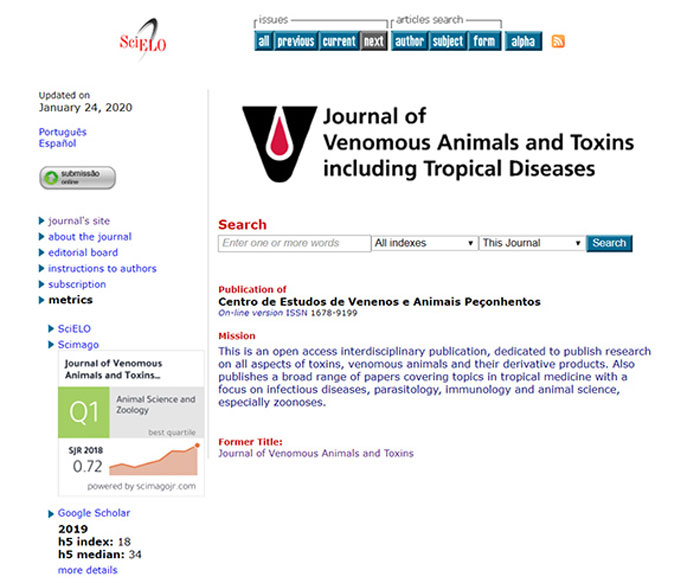 Figure 15. Page of JVATiTD within SciELO library since 2013.