Snake venoms: from production to bioprospecting 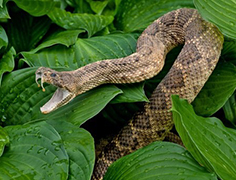 Snakes are responsible for intriguing feelings; they are simultaneously seen as dangerous and fascinating animals. Snakebite envenoming, classified as a neglected tropical disease by the World Health Organization (WHO), is accountable for approximately 50.000 deaths annually, mainly in least developed countries. It is known that variability in venom composition occurs among populations and individuals of the same species, according to gender, diet, ontogeny, or even geographic distribution, which may result in different clinical manifestations of envenoming. Knowledge of such variations allows the selection of appropriate specimens for production of more effective antivenoms and biological products.

Based on these aspects, the proposed thematic series edited by Anita Mitico Tanaka Azevedo (Butantan Institute, SP, Brazil), Karen de Morais Zani (Butantan Institute, SP, Brazil) and Alexandre Tashima (Federal University of São Paulo, SP, Brazil) aims to contribute to research on maintenance of snakes in captivity, best practices for animal welfare, and guidelines for antivenom and biological products production. If you have any work that can add to this fascinating subject, you are invited to join us.

The proposed deadline for submissions is until March 31, 2020.

Manuscripts should be formatted according to our submission guidelines and submitted via the online submission system. Please indicate clearly in the covering letter that the manuscript is to be considered for the “Snake venoms: from production to bioprospecting” series.

If you would like to enquire about the suitability of a manuscript for consideration, please email a pre-submission enquiry to editorial.jvatitd@unesp.br.